Sicardi Gallery is excited to present its first solo show in collaboration with Maxwell Davidson Gallery featuring the work of Pedro S. de Movellán. Titled Grace: A distillation of current kinetic works, the exhibition encompasses several years of the artist's dynamic production, which captivatingly spins, rotates, and transforms before the viewer. The artist will be present for the opening reception at Sicardi Gallery on Thursday, March 30, 6-8pm.

The solo show testifies to de Movellán’s inspired command of movement and materials such as aluminum, stainless steel, wood and treated metals. Veritable kinetic masterworks such as Entropy (2006), as well as more recent pieces, like Papillon (2015), will be prominently displayed. Together, the works reflect the artist’s keen experimentation with light, control, and the constantly evolving process through which digital technology helps accentuate an analog experience.

As a whole, de Movellán’s work displays a strong interest in nature and mechanics. His recent exhibition, CODE, playfully referred to both the genetic code of living organisms and the digital code which the artist uniquely applied to each of his creations. De Movellán’s pieces are also shaped by a careful consideration of context, designed for indoor or outdoor environments. The tensions between randomness and chaos, associated with nature, and the precise coding required to produce its illusion provide a critical point of contemplation in the artist’s work.

With a BFA in Sculpture from the University of Massachusetts at Amherst and additional studies in Industrial design at the Rhode Island School of Design, de Movellán’s work was most recently highlighted in the 2016 show, CODE, and his 2014 retrospective at the Maxwell Davidson Gallery in New York. This exhibition led to the successful publication of the monograph, Pedro S. de Movellán: Complete Works 1990-2012. His work forms part of private collections across the globe, including the USA, Brazil, Denmark, Great Britain, Germany, Netherlands, New Zealand, Oman, Saudi Arabia, South Korea, Spain, Switzerland, Turkey, and Venezuela. 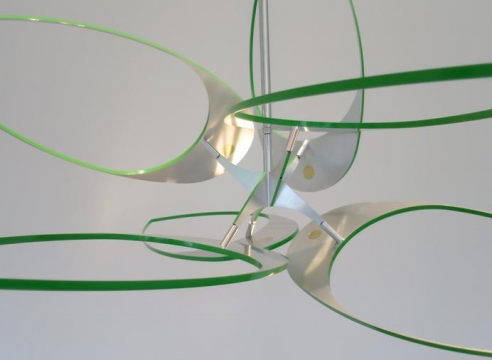