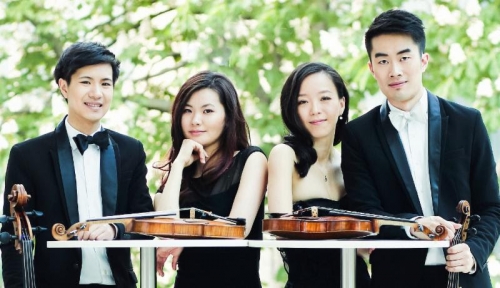 Sicardi Gallery is pleased to partner with Aperio, Music of the Americas, to host "American Dreams," a performance of work by Dvorak and Schickele by the Rolston String Quartet. The concert is at 3 pm on Sunday, October 5 at Sicardi Gallery.

This concert features two significant chamber works for strings inspired by both the vast landscape and musical culture of the United States. Written in 1893, Antonin Dvorak’s beloved String Quartet No. 12 in F major (“American”) evokes the composer’s admiration for folk music, spirituals, and natural phenomena of the new world. These themes resonate in the music of American composer Peter Schickele who composed his similarly inspired String Quartet No. 1 ("American Dreams") almost a century after the Czech master. Presented as complementary emblems of American ideals in music, these works reveal a mutual veneration for the European and American classical and folk traditions.

Tickets may be purchased at www.aperioamericas.org.