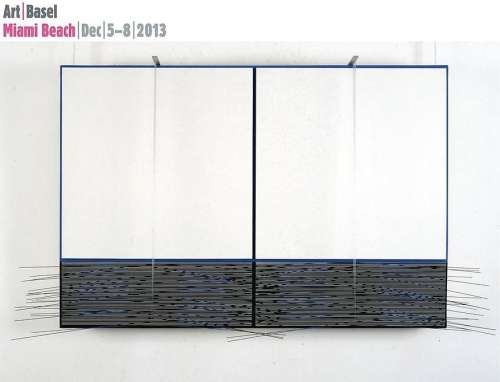 The post-war period in Latin America produced a tremendous range of artistic innovation, especially in the fields of abstract and kinetic art. Each of these artists--many of whom are based in Paris--are leaders and integral participants in transnational modernist movements.

Carlos Cruz-Diez (b. 1923, Venezuela), known as one of the founders of the kinetic art movement, explores the eye’s perception of color in space with his Physichromies and light installations. We are pleased to present two Physichromies, including a large-scale work created for the exhibition. Antonio Asis (b. 1932, Argentina) moved to Paris in the 1950s, where he became interested in optical vibrations, exploring light, color, movement, and geometric shapes in his paintings and works on paper. Throughout his diverse production, Jesús Rafael Soto (1923-2005, Venezuela) visualized movement, often by inviting his viewers to engage directly with the objects he created. In his works on paper, Manuel Espinosa (1912-2006, Argentina) explored the illusions produced by precise variations of line. Luis Tomasello (b. 1915, Argentina) pairs geometric patterns with subtle coloration to evoke optical effects of light and shadow, reflection and illusion, in his work. Sérvulo Esmeraldo (b. 1929, Brazil) creates abstract sculptures that draw the viewer into a close engagement with the environments surrounding them. Julio Le Parc (b. 1928, Argentina) explores optical and kinetic effects of light in his wall pieces and installations.

Seen together, these works offer visitors to Art Basel Miami a sense of the dynamic variety, visual complexity, and historical importance of post-war abstraction from Latin America.