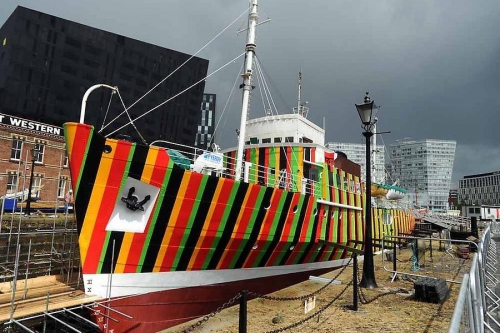 Liverpool Biennial with Tate Liverpool and 14-18 NOW, the official cultural programme for the First World War Centenary Commemorations, are co-commissioning one of the major figures of contemporary art, Carlos Cruz-Diez, to paint a version of a ‘Dazzle Ship’ in partnership with National Museums Liverpool.

The Edmund Gardner vessel is conserved by Merseyside Maritime Museum and will be ‘dazzled’ in dry dock adjacent to Albert Dock Liverpool.

The ‘dazzle’ technique, immortalised in Alfred Wadsworth’s 1918 painting Dazzle-ship in Drydock at Liverpool, was undertaken and inspired by artists of the time. Wadsworth himself supervised the camouflaging of over 2,000 warships.

Unlike other forms of camouflage, dazzle works not by concealing but by making it difficult to estimate a target’s range, speed and direction. Artist Norman Wilkinson, credited with inventing the technique, explained that dazzle was intended primarily to mislead the enemy: each ship’s dazzle pattern was unique in order to avoid making classes of ships instantly recognisable to the opposition.

Carlos Cruz-Diez (Caracas, 1923) has lived and worked in Paris since 1960. His artistic roots reach back to the Movimiento Cinético [Kinetic Movement] of the 1950s and 1960s. As his thinking on the visual arts has evolved, his ideas have changed attitudes on how colour is perceived in art. According to his artist’s statement, colour is an autonomous reality, devoid of anecdotes, that evolves in real time and space with no need of form or support. Carlos Cruz-Diez’s artistic proposal is based on eight research projects that reveal the myriad ways in which colour behaves: Couleur Additive [Additive Colour], Physichromie, Induction Chromatique [Chromatic Induction], Chromointerférence, Transchromie, Chromosaturation, Chromoscope, and Couleur dans l’espace [Colour in Space].

Liverpool Biennial’s dazzle ship is part of Monuments from the Future: a new

commissioning initiative between Tate Liverpool and the Biennial which invites artists

present. In order to fulfil this paradoxical task, artists will collaborate with professional futurologists (social scientists who predict possible future scenarios) to determine possible future circumstances and set of events for which a new monument can be imagined and produced. This project will slowly turn Liverpool into a sci-fi sculpture park making use of Liverpool’s industrial archaeology to celebrate its possible new futures.

The Cruz-Diez Foundation is an organisation committed to preserving, developing, exhibiting, and researching the artistic and conceptual legacy of Carlos Cruz-Diez, one of the twentieth century’s seminal thinkers in the field of color.

We believe that the arts are the finest communication system ever invented by mankind. Our goal is to stimulate and nurture the kind of intellectual inquiry that leads to new forms of expression.

Liverpool Biennial, an ongoing platform for research, commissioning and presenting international art, education and debate, is the UK Biennial of Contemporary Art. In 2012, it attracted over half a million visitors over its ten weeks run and since its founding in 1999, has shown the work of over 350 artists from 72 countries. Since 2004, Liverpool Biennial has contributed over £98.9 million to Liverpool’s economy.

Liverpool today offers the richest visual arts environment anywhere in the UK outside London. It has more galleries and museums, and commissions more new art than any other city except the capital and was European Capital of Culture in 2008. Liverpool Biennial festival takes place in a wide range of locations across the city, from established museums and galleries to unusual and unexpected places.