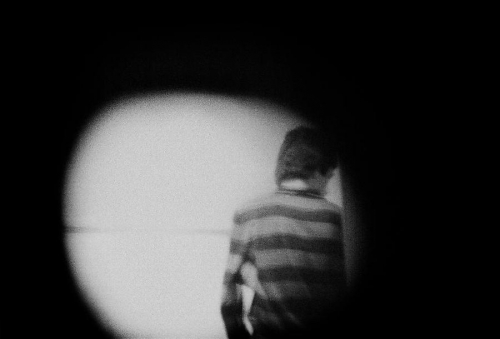 I was an art student in Bogota, a very conservative city; in photography I’d found a means of expression for my sexual orientation. In the middle of the 1960s, I discovered the Faenza and other rundown cinemas where homosexuals could meet up.

I went to these cinemas for several years. The moments I experienced there were the driving force behind my work at the beginning of the 1970s when, equipped with my Pentax, I began to furtively capture said moments. It was only some years later that I found in these feverish documents a great artistic value, which I’d underestimated when taking them. In 1978, I persisted in taking photographs in the Faenza’s very dark interior. As a precaution, I had to hide my camera and therefore I couldn’t use a flash, frame or even focus. I’d hidden the camera in a little suitcase that also contained a small lamp, a shutter release mechanism and a good amount of modelling clay. Sitting out of the way near the screen, I’d counted the rows of seats and calculated the distance so that, with the help of the lamp, I could adjust the focus on the camera inside the case. My Pentax was attached to the chair arm with the modelling clay. Waiting for the first signs of activity so as to set off my camera, I’d then count to 30, press the shutter release mechanism, turn the roll of film to the next image, and thus continued to take photos.

My first attempts were failures, but once the process got through its teething problems, I worked for a year and half with 50 and 200 millimetre lenses. I also experimented when developing the photographs, ‘forcing’ the development time to 30 minutes and modifying the temperature from 20 to 25 degrees. I thus obtained a hundred images from this period.

Exhibition produced by the Rencontres d’Arles in collaboration with the artist and the Sicardi Gallery, Houston.

Along with three other contemporary Colombian artists, Miguel Angel Rojas will take part in the exhibition NOCTURNES DE COLOMBIE, Images contemporaines*, from 17 September 2013 to 2 February 2014 in the frame of PHOTOQUAI 2013.