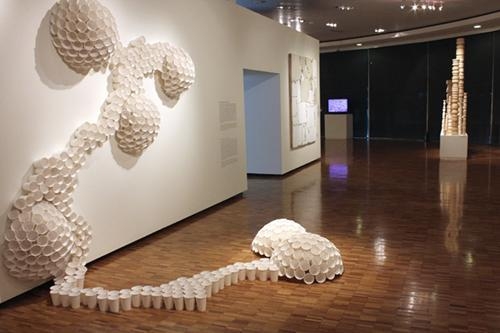 In Mexico, the modern evolution had a vigorous speculative impulse in non-representational discourses, historically labeled as Abstraction. Despite its strong impact on Mexican visuality and its cultural practices in the second half of the 20th century, the critical revisitation of “the abstract” has generally been resigned to decontextualized and formalistic readings of its contributions. However, his playful and speculative spirit, self-referred to his own energy, has also been a constant of radicalism and resistance in the visual production of the country.

In the current contemporary scene in Mexico, works where the analytical construction, the quality of the material, the structural game, the non-referentiality and the metaphysical speculation, converge in a practice that is still difficult to label as abstract.

Thus, these works draw on dissimilar collections: from the pop tradition, to minimalism, to post-conceptual practices and to the very historicity of modern abstractions. Its conceptual motive –in many cases referred to parody modern languages–, emphasizes reductivist strategies, constrains the theoretical-narrative evidence and minimizes any representation model.

Hence, the present exhibition proposes a reflection on these searches, whose intellectual platform and whose visual predicaments, question our accommodation to abstract rhetorics and to the patterns of an artistic perception traditionally linked to the representational. Cimbra…shares with us the challenge of understanding works of art as elusive, opaque, surely unstable mental processes…uncomfortable to pigeonhole.