Carlos Cruz-Diez completed his largest commission in North American in 2015, for the law firm Covington, located at Washington, DC's City Center development, designed by Foster + Partners. Sicardi Gallery collaborated in the commission and production of the Transchromie installation.

The CityCenter development covers six city blocks in the heart of Washington, DC, and includes retail space, restaurants, apartments, offices, and a hotel, designed by Herzog & de Meuron. Cruz-Diez's Transchromie spans two corner glass walls, and is visible from inside and outside the building. As light enters the building, the installation casts vibrant shadows of color on the floor and walls of the interior. Cruz-Diez also completed two Physichromies for the building.

In an interview with Wallpaper* Magazine, Cruz-Diez says, ‘It was an enormous pleasure to intervene in a space by Foster + Partners, where the light offered me the opportunity to create one spectacle during the day and another at night. During the day, from the inside, the brightness of the site allowed me to reveal the subtractive effect of the transparent colours, and at nighttime, the illumination from the interior would project a spectacle into the space of the city.’ 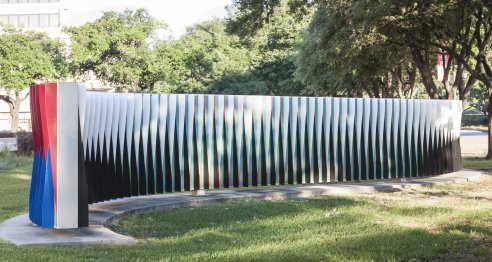