Sicardi Gallery is pleased to present an exhibition curated by Patrik Haggren.  A former Core Resident at The Glassell School of Art in Houston, Haggren brings together works by four local artists in an exploration of Gego's application of the line. With new work by Anna Elise Johnson, Mikhail Lylov, Gabriel Martinez, and Lauren Moya Ford, the exhibition offers an investigation into the unpredictability of abstraction, and looks to nature and chaos as locations for the line's movements, projections, and recompositions.

In four graphite drawings, Anna Elise Johnson references police evidentiary drawings of rocks thrown at patrols along the U.S.-Mexico border. In them, Johnson points to the arbitrary nature of measurement, and to the materiality of protest and police response. Her acrylic collages layer images of broken barricades. Johnson was a Core Resident at The Glassell School of Art in Houston from 2012-2014.

While Gego's line moves along a continuum from the contours of figures to abstract fields of movement, Mikhail Lylov's installation Khlebnikov for the Birds renders imperceptible any difference between mouth and beak in the artist's whistling address to a robin. In a second film, the camera goes along a rock's texture with such close curiosity that one loses sense of outside coordinates and the shape of the rock turns into a continuous plane.

In his series of silver point drawings, Gabriel Martinez alludes to the entwined histories of economic abstraction and ideal geometry. As the silver oxidizes over time, the drawings take on different tonal variations, producing chromatic effects that allow for chaos and unpredictability. Martinez was a Core Resident at The Glassell School of Art in Houston from 2010-2012.

Lauren Moya Ford's ink drawings reference the rock collection of Roger Caillois, featured in his book The Writings of Stones. Caillois pays specific attention to the septaria rock because its linear developments happen independently of one another, asymmetrically in three dimensions. In a watercolor, Ford also plays on domesticated "still life" and the chromatic, floating qualities of the line, separated from the vase or plant.

Patrik Haggren is a researcher and curator interested in material configurations that sense and feel, specifically their capacity to act within different practices and ways of knowing. He has most recently curated From Here to Afternoon (Laura Lee Blanton Gallery, 2013), an exhibition on the accumulation and projection of movements within dance, photography, economy, labor struggle and sculpture. Haggren currently lives in Berlin, and is at work on projects in several places, including Houston and Stockholm, where he attends CuratorLab, an experimental seminar for curatorial projects. 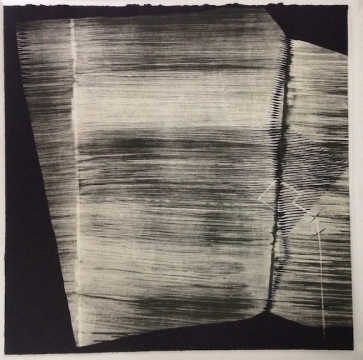